Surveillance – How to secretly track cellphone users position around the globe

Using the proper surveillance systems available on the market it is easy and quick to track cellphone and the movements of targets everywhere on the globe.

We recently discussed about the decision of Wikileaks to publish copies of the criticized surveillance software FinFisher, highlighting the dangers for the militarization of the cyberspace and in particular for the use of spyware to track users.
The principal vendors of surveillance platforms defend their business declaring that the solutions are only for law enforcement and intelligence agencies. Unfortunately the reality is quite different, because many threat actors worldwide use surveillance malware to track individual for different reasons.
The Washington Post published an interesting article a few weeks ago on surveillance technology that can be used to track individuals anywhere in the world through the localization of their mobile devices.
The post explains that surveillance vendors using the SS7 protocol, aka Signaling System Number, are able to geo-localize users with great precision.
SS7 or Signaling System Number 7 is a protocol suite used by several telecommunications operators to communicate with one another with directing calls, texts and Internet data. The SS7 protocol allows cell phone carriers to collect location data related to the user’s device from cell phone towers and share it with other carriers, this means that exploiting the SS7 a carrier is able to discover the position of its customer everywhere he is.
Another family of devices sold by companies which provide surveillance solutions are the IMSI catchers, also known by one popular trade name, StingRay. An IMSI catcher (International Mobile Subscriber Identity) is device for telephonyeavesdropping commonly  used for intercepting mobile phone traffic and tracking movement of mobile phone users. Essentially, it operates as a bogus mobile cell tower between the target mobile phone and the service provider’s real towers. The IMSI catcherruns a Man In the Middle (MITM) attack that could not be detected by victims using commercial products.
The use of trackers based on exploitation of the SS7 protocol is recommended with “IMSI catchers,” infact while SS7 tracker locate the victim the IMSI catchers can be deployed effectively.
StingRays are common surveillance devices that allow are able to intercept calls and Internet traffic, send fake texts, install malware on a phone, and of course find the precise location of the victim.

Privacy advocates are really concerned with possible misuse of such technology, foreign state-sponsored hackers and cyber criminals could use it for illegal activities. Let’s remember that it is illegal in many countries to track individuals without a court order, but there is no clear international legal framework that punishes ill intentioned for secretly tracking people in other countries.

The FCC recently created an internal task force to study the misuse of IMSI catchers in the cybercrime ecosystem and foreign intelligence agencies, which demonstrated that this technology could be used to spy on American citizens, businesses and diplomats. 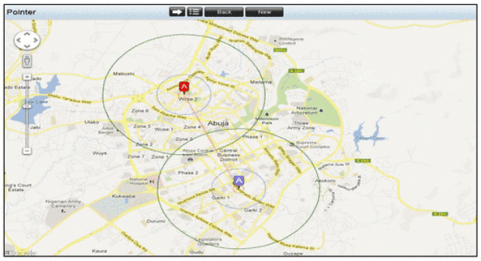 Don’t forget that government to track us just need to type our phone number into a computer portal, which then collects data about our location, to within a few blocks in an urban area or a few miles in a rural one, from databases maintained by cellular carriers.

The brochure includes screen shots of maps depicting location tracking in what appears to be Mexico, Nigeria, South Africa, Brazil, Congo, the United Arab Emirates, Zimbabwe and several other countries. Verint says on its Web site that it is “a global leader in Actionable Intelligence solutions for customer engagement optimization, security intelligence, and fraud, risk and compliance,” with clients in “more than 10,000 organizations in over 180 countries.”